Peru is an mainly Catholic nation, so Easter is a very important celebration. Some affluent families, especially from Lima, go on Holiday at this time of the year. For example, a popular destination for wealthier people is the northern beaches of Peru where you can enjoy summer weather all year round (and this put hotel prices up during Easter, Christmas, New Year, etc) but most of the people celebrate Easter the traditional way.
Holy Week is one of the religious dates venerated in Peru with great devotion there are processions, carpets of flowers, the aroma of incense, sorrowful hearts, slow pacing, grief-stricken by the death of Jesus, temples with candles welcoming devotees begging pardon for their sins. Just a few of the demonstrations of their faith.

Food is an important part of Easter, especially on Friday where eating meat is not allowed but people instead eat fish in a variety of preparations, my favourite used to be the typical Chupe de Viernes (Friday Soup) made with Crayfish, cheese, milk, potatoes and vegetables. People eat as well variety of desserts like Mazamorra Morada (Jelly made from starch and fruits and colured with purple corn) or “arroz con leche” more like a rice pudding. On sunday it’s typical to eat in Arequipa the “caldo blanco or seven meats soup” made with beef, lamb, chicken, pork, charqui (dried meat), goats and potatoes and vegetables to celebrate that Jesus is alive again.
Easter week represents the peak of religious sentiment for the people of the Andes. The departmental capital of Ayacucho, San Cristóbal de Huamanga, located in the central Andes at an altitude of 2,761 meters above sea level, celebrates one of the most intense portrayals of the passion, death and resurrection of Christ.
The week starts out with the entry of Jesus into the city riding on a donkey. On Wednesday, the images of the Virgin Mary and Saint John are paraded in fervent processions through streets carpeted with flower petals until they meet up with the litter bearing the image of Christ, whom they "greet" in the main square. On the evening of Holy Friday, the lights of the city wink out to give way to the Christ of Calvary.


The image sets out from the Monastery of Santa Clara in a procession through the streets on a litter strewn with white roses, followed by the grieving Virgin Mary and lines of men and women strictly dressed in mourning bearing lit candles. The litter, which features thousands of white candles, is simply magnificent.
The litter is then accompanied with prayers and songs throughout the night until the three-hour sermon is delivered on Saturday. After days of grieving, Resurrection Sunday takes on a festive air, Christ is resurrected and appears once more on his litter and is carried through the streets.
EASTER IN CUSCO 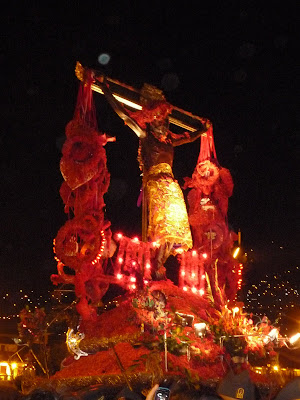 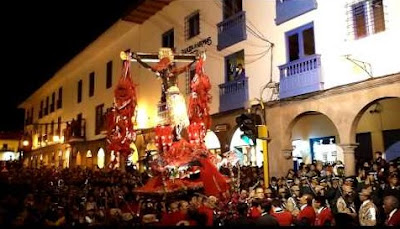 Since that day, the Holy Week is celebrated with numerous processions which are accompanied by a large multitude of believers.

The houses' windows where the procession passes carrying Jesus Christ's effigy, are decorated with glowing velvet draperies and carpets, adorned with golden laces. Like in Ayacucho, on Good Friday the encounter between Jesus Christ in the Holy Grave and the Virgen Dolorosa (Suffering Virgin) takes place. 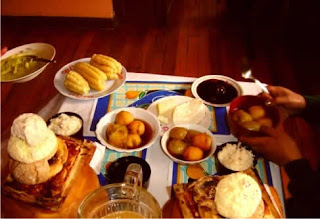 Unlike many other places, in Cusco, this day is not celebrated with abstinence: it is common to prepare up to 12 dishes, starting with a great variety of soups and ending with delicious desserts, made of apple or corn. Holy Week comes to its end on Easter Sunday: after the processions and the celebration of the mass the air is filled with different kinds of flavors, coming from dainties like empanadas (fritters filled with meat or chicken), tamales (a dish made of corn, wrapped in banana leaves) and cakes. That is how the Andean Semana Santa closes in the imperial city of Cusco.
Original versions:
http://www.peruline.com/peru/semana_santa_cusco.htm
http://www.perutravels.net/peru-travel-guide/art-festivals-easter-week.htm
Publicado por Edith Vega-Centeno en 10:51 No hay comentarios: